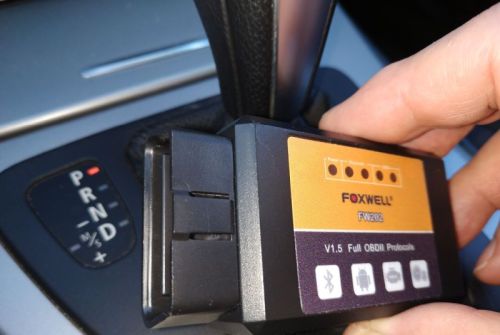 All modern cars are equipped with OBDII interface. According to the standard, the OBDII interface connector must be located in a strictly defined place in the car.

On Board Diagnostics, OBD-II, is required on all automobiles and light trucks in the United States from 1996 onward. OBD-II is a set of specifications for monitoring and reporting on engine performance in modern automobiles. Diesel (compression ignition) vehicles were not required to support OBD until 2004. Some pre-2001 petrol vehicles and pre-2004 diesel vehicles have a 16-pin connectors but they may not be OBD-II or EOBD compliant.

Where is an OBD II connector?

OBD-2 connector must have pins 4, 5 for ground connections and pin 16 for 12 volt power supply from the vehicle battery.

What is OBD DTC?

If the vehicle's onboard diagnostic system detects a malfunction, a DTC corresponding to the malfunction is stored in the vehicle's computer, as well as realtime data from the sensors connected to the on-board computer. In addition, the OBD-II interface provides a means to clear the DTC's once maintenance has been completed. A service technician can retrieve the DTC, using a scan tool, and take appropriate action to resolve the malfunction. Prior to the advent of digital powertrain control modules, which is the technical enabler for the OBD feature, repairing a vehicle relied solely upon the technicians skill and service literature from the auto manufacturer.

The OBD-II specification provides for a standardized hardware interface - the female 16-pin (2x8) J1962 connector. Unlike the OBD-I connector, which was found under the hood of the vehicle, the OBD-II connector is located on the driver's side of the passenger compartment near the center console.

More about it later.